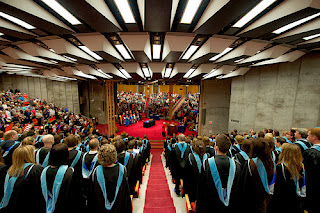 Recently I sat at dinner beside a gentleman who told me he had attended the Mount’s Convocation for the first time this May. When I asked him why, he told me that he and his wife have a housekeeper who for many years has been working part-time in the evenings to complete her degree. She’s the first in her family to attend university, and they were there to celebrate her success. This story offered a powerful reminder of the dedication and hard work that goes into earning a university degree, and the pride our graduates – and their supporters – take in their accomplishments.

Nova Scotia is home to ten excellent universities, each boasting thousands of similar success stories every year. As the Mount graduates talented students in fields such as communications, modern languages, applied nutrition, family studies, public policy, economics and more, so too do our counterparts in their areas of focus. These efforts arm our province with a highly educated, highly skilled, competitive workforce and each graduate is a testament to the role we play in elevating our region as a whole. But our contributions extend far beyond annual convocations.

According to a 2013 report by the Council of Nova Scotia University Presidents, our province’s universities produce a combined economic output of $2 billion, $220 million in tax revenues, $840 million in annual export revenues, and over 8,000 jobs. Our strategic value for the province is substantial. We can attract international immigrants, we can contribute research and innovation to all sectors, and we can ready our younger students to stay and work right here – all this with the second lowest provincial funding per student in the country.

As a major port city in Eastern Canada, Halifax is at a crossroads. The Nova Scotia government, in partnership with the federal government, appreciates the value of internationalization and has made it a priority to increase immigration in the province, particularly Canadian-trained international graduates. Our universities have a key role to play in this process.

Currently, the Mount’s student body of just over 4,000 includes 590 international students from over 50 countries. Apart from the strong economic case for international education, these students greatly enrich our campus, many becoming leaders in both academics and community service. PR graduate and Dakai Magazine founder Meng Zhao sets a strong example as she builds ties between the local community and Chinese culture. It’s clear that the ongoing accomplishments of our international students will only continue to enhance our region.

As we welcome students from across the country and around the world for another year, let’s remember the importance of what we do and why we do it here in Nova Scotia. Our work as universities has tremendous benefits on an individual basis as seen by our students, their classmates, and their employers, and on a broader scale as seen through our contributions and innovations across all sectors. Just as our province offers a strong environment for post-secondary education, we in turn continue to strengthen Nova Scotia’s global appeal.
Posted by Dr. Ramona Lumpkin at 3:01 p.m.

Dr. Ramona Lumpkin
Halifax, Nova Scotia, Canada
I joined Mount Saint Vincent University as President and Vice-Chancellor in October 2010. My research and teaching interests include 19th Century British literature, 20th Century drama, women’s literature, and adult and continuing education. I’ve been actively engaged in women’s studies, in advocacy on behalf of women’s issues and in promoting the role of women in higher education. I also take great pride in community service and was recently appointed Post-Secondary Chair for the United Way of Halifax Campaign.